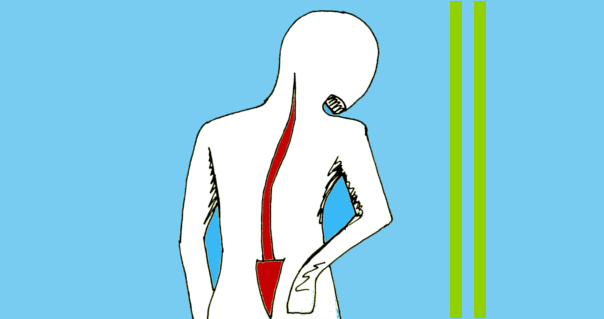 What is ankylosing spondylitis?

Ankylosing spondylitis (AS) is an inflammatory disease usually focused in the spinal joints but can affect other joints as well.  Inflammation in the joints over time causes the joints to fuse causing decreased motion.  The cause of AS is poorly understood.  This condition starts in late adolescence or early adulthood and is largely considered to be more prevalent in males.  The ratio of male to female incidence has been found to be as high as 5:1, however, there is conflicting data on this ratio and there are some researchers that believe that the ratio is closer to 1:1 and that women are grossly under diagnosed.1

An early indication of ankylosing spondylitis is low back pain that is worse with prolonged disuse, for example after sleeping, and gets better with use.  People with AS are often slow to get the correct diagnosis because it looks like other more common conditions.  People with AS have usually seen a multitude of different health care providers in different disciplines before they finally find out that they have AS.  The diagnosis is usually made via x-ray but can also be confirmed by looking for a specific gene marker.   Because there is a correlation between a specific gene marker ( HLA-B27) and this condition, if you have symptoms of AS and the gene marker, it is likely you will be given a diagnosis of AS even if your x-rays are clear.  It can take awhile for AS to show up on x-rays, thus symptoms plus a positive HLA-B27 is a good proxy for early diagnosis.  However, just because you have this gene does not mean that you will get AS.  Also, if you don’t have this gene it doesn’t mean that you won’t get AS.  The gene marker is only a correlation not causation.  Due to a correlation between certain kinds of arthritis and genetics, it helps to know your family history of inflammatory diseases.  Those people with a family history of rheumatoid arthritis, reiters, sjogins, crohn’s disease, and psoriasis (not a complete list) are at an increased risk of having AS.  Having a good picture of your family’s health history and being able to share this information with your health care provider will help you get a proper diagnosis more quickly.

Chiropractors are often the first to diagnose AS because it usually starts as low back pain.  Caring for ankylosing spondylitis calls for a different kind of chiropractic treatment than the average person with low back pain would receive.  The goal when treating AS is to keep as much movement in the joints for as possible for as long as possible.  A mobilization technique should be used.  Typically a chiropractic adjustment focuses on moving one joint that is hypomoble (a joint with not enough motion) at a time.  In the case of AS, the chiropractor is trying to help the patient maintain a normal range of motion through the whole spine.  First and foremost, these adjustments should feel good; if the adjustments don’t feel good, you need to talk to your chiropractor so that they can change their technique to one that works for you.  Second, they will most likely be “pop” free.  The stereotypical “popping” adjustment might be utilized at the onset of ankylosing spondylitis but it should be phased out as the disease progresses.  It is very important for people with AS to receive some sort of mobilization care.  A chiropractor who has worked with AS is a good choice for administering mobilization treatment.  Other options for mobilization care are physical therapists and doctors of osteopathy.  Whoever you chose for this part of your treatment should be actively doing mobilization with you as well as giving you posture exercises, core stabilization exercises, and active range of motion exercises to do as homework.

Who else should be on your health care team?

You should have a rheumatologist on your team.  Ankylosing spondylitis falls within a rheumatologist specialty.  They will be able to help you with the full scope of this disease.   It would be wise to get a dietitian involved because bone loss and inflammation are concerns.  A dietitian can help mitigate both of these issues.  AS sometimes involves the eyes, the intestines,  and/or the heart.  It is a good idea to have an ophthalmologist on your team before you need them so that you aren’t trying to get in to see them as a new patient if it becomes an emergency.  It is always more challenging to be seen as a new patient than a returning patient.  The same is true for a cardiologist.  Your rheumatologist will, hopefully, be your lead health care provider and coordinate with the rest of your team.